Hi there. My name is Ryan Calder. I’m an artist and musician, and my goal is to bring people together through my art and my music. 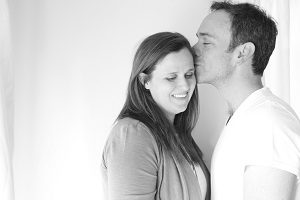 This is me and my wife Tamlyn. We’ve been married just over a decade now. She’s an amazing wife, mother and friend and works as a high school drama teacher.

Tam and I met in a theatre show that we were working on together. She was singing and performing and I was part of the band. Her version when she walked in and saw me sitting behind the piano was, “Oh oh, here comes trouble!”

This is my tribe: Rachel, Adam and Zoe. Biased as I am, they’re awesome. And they inspire me.

And this is me in my home studio… 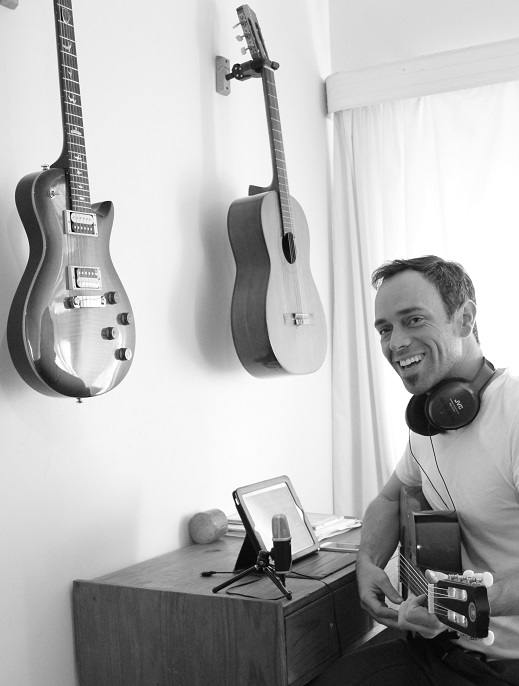 I get inspired from all of my day-to-day activities. I interact with a lot of people in the course of a given week and there’s always plenty to reflect on and be inspired by.

When I’m making sense of it all and creating stuff like music and art, I like to do it at home. I find it peaceful and for me, it’s the most productive place to be.

In this current season, most of the new music, songs and creative ideas have been birthed from sitting thinking in my little home studio or the garage or in the lounge by the fireplace… technology is such nowadays that you don’t need massive fancy gear and isolated sonic spaces to be able to put your ideas down and get going with things.

Some purists will argue differently. They’ll say you should have absolute quiet, and that you can hear the quality difference between 96 and 48kbs on a studio microphone.

While I admire that kind of dedication to the craft, life is just not like that for me. The children, the neighbourhood dogs, the birds outside – that’s the sound of the world I live in, and if you listen carefully, that’s all a part of this project on some of the vocal and instrument tracks on this project.

MY HISTORY
I started playing music in high school. As a drummer, believe it or not.

Guitar and vocals came later as I plyed my wares through university. During this time, I penned and recorded my debut album, Better Days.

In 2007, I performed for the third time at Splashy Fen, but now under the conspicuous pseudonym of the “Ryan Calder Band” with my fellow band mates.

In 2010, my second album On The Edge made its way to the marketplace. It was a lot of work writing and producing that album, but I was happy with the content and message in the songs, which is ultimately what I am about.

In 2011, I won an International Songwriting Competition and I travelled to Barcelona, Spain to attend the Future Music Forum. All the major label representatives were there to talk about where the industry was heading.

I remember having a conversation with one rep from the UK who came up to me and said, “You must be Ryan?”

“How did you know?” I replied, very surprised.

“You’re the only muso here. I always look for which musos are in attendance among the business dudes.”

I liked that. It caused me to think about my music and what truly makes an impact, rather than fame and fortune (which is a common thread with the industry).

After numerous performances and continuous writing, my brother and I embarked on duo tour along the East coast of South Africa in 2013. We played six shows which were small, but nothing short of amazing. I remember that particular tour fondly.

In 2015, with two dozen new songs, we launched the House Concert Series. By now, I was performing with a wider range of people and collaborating almost on-the-spot with talented musicians which gave each show its own distinct flavour. I lost count of how many shows we played that year, but it cemented again my desire to connect with people through music and art, to inspire and encourage communities with a message of hope.

I am currently working on a project called The Great Deep. The main idea is to combine my love of the arts (music, cartoons, animation and photography) into a message that inspires, encourages and entertains people young and old. To that end, I am working with all sorts of people to spread that message.

The Great Deep is an ongoing project which I would invite you to subscribe to. I am publishing new material on a regular basis (songs, cartoons, storyboards, animations, blogs, videos and podcasts) which subscribers have premium access to.

If you like what you see and hear and would like to donate to help continue this work getting produced, there is also a donation option.

If you would like to get in touch with me, please drop me an e-mail – I would love to hear from you!